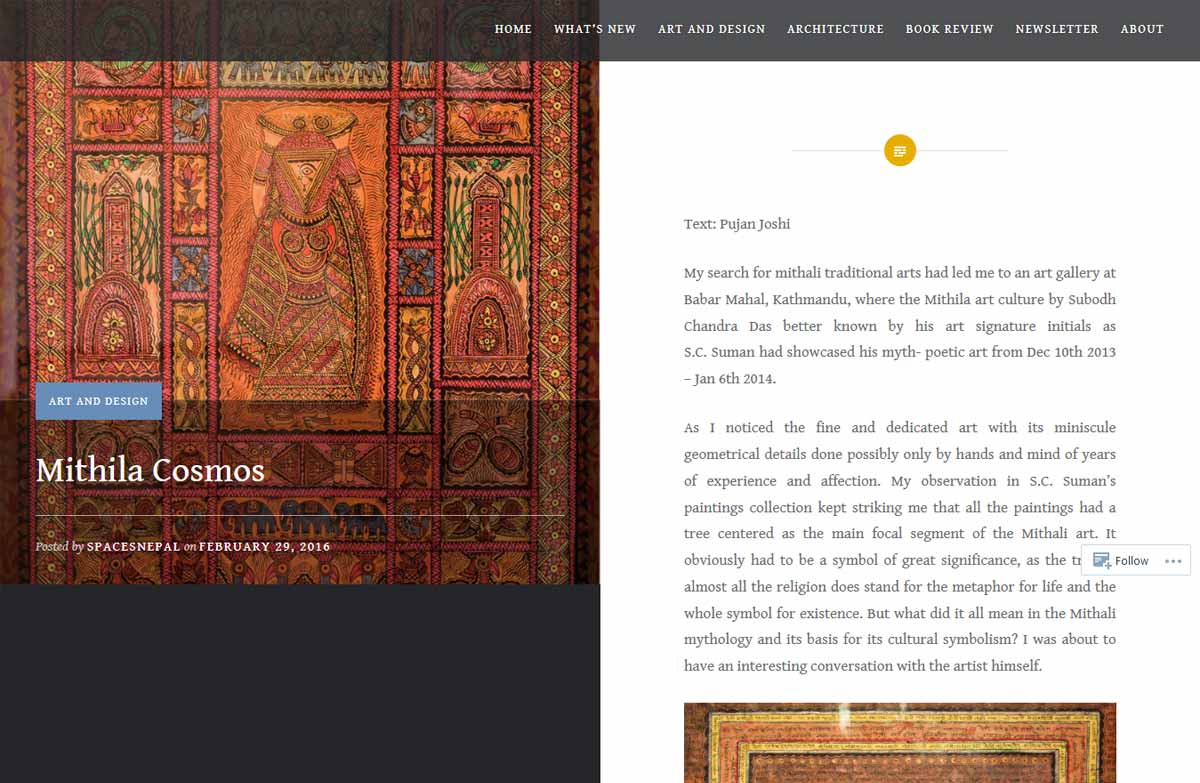 Text: Pujan Joshi
My search for mithali traditional arts had led me to an art gallery at Babar Mahal, Kathmandu, where the Mithila art culture by Subodh Chandra Das better known by his art signature initials as S.C. Suman had showcased his myth- poetic art from Dec 10th 2013 – Jan 6th 2014.
As I noticed the fine and dedicated art with its miniscule geometrical details done possibly only by hands and mind of years of experience and affection. My observation in S.C. Suman’s paintings collection kept striking me that all the paintings had a tree centered as the main focal segment of the Mithali art. It obviously had to be a symbol of great significance, as the tree in almost all the religion does stand for the metaphor for life and the whole symbol for existence. But what did it all mean in the Mithali mythology and its basis for its cultural symbolism? I was about to have an interesting conversation with the artist himself.

After a moment of literally being hypnotized by the art, it looked as if there was a hidden message in his art, trying to express something out of the ordinary. Though it looked a bit complex .I found out the Mithali art was actually less secretive and more possible for everyone to grasp. The artist’s aspiration was to make people step back and look at their own lives by being in root and harmony with nature and the culture.
As the warm afternoon sun started gleaming in the courtyard, I ventured out of the exhibition hall to have a glimpse of the renowned artist and if fortunate enough maybe a composed conversation of his art and on his influences to have had become such an accomplished artist. Who had already claimed a series of awards & certificates and to name a few , such as Rastriya Pratibha Puraskar (National talent ) by the Nepal Government , two national Awards in the National Art & Craft Exhibition presented by Nepal Association of Fine Art (NAFA), Nepal and Certificate of Excellence presented by KU & American Embassy Kathmandu, Nepal.

Our conversation started and obviously it started with his childhood, I wanted to discover the origin behind such a creative mind, and to my astonishment his story did have touching ingredients, like I had thought.
So what is Mithila painting? Its said to be originated from the village madhubani,in Mithila region, Bihar. Mithali ancient art form been passed down through generations. The legend goes that the Mithila painting began when King Janak, ruler of Mithila asked to paint the homes when his daughter Sita was getting married to Lord Ram in the Ramayana texts. Originally women were the foremost part of these elaborate symbolic paintings. In another interesting touch the massive earthquake of 1934 in Bihar had most of the villages walls and houses left in ruined and a British colonial officer in Madhubani District discovered a vibrant newly exposed paintings in the interior walls of homes. He then took these pictures and those pictures are now considered to be the early Mithali photographic images and was later popularized all over the world.

Subodh Chandra Das was born in Siraha District, Nepal in September, 1961. He remembers his childhood as to growing up in the Mithila art culture greatly inspired by his grandmother. The paintings used to be done in the walls in almost all the interior walls of any homes in their village. As the eldest brother of three, his father had high hopes of his son becoming a doctor or an engineer and had always discouraged his son to be influenced in an art culture where women were doing it were thousands of years.

As he went on his high school days, he remembers an art exhibition where his brothers and friends forced him to compete because a minister was inaugurating the program. In his innocent sparkle in his eyes made me appreciate the special moment when he was awarded the best prize. A grasp of comforting air and S.C Suman remembers how he had to hide the prize from his father as he sometimes did get beatings for not following his orders to pursue his dreams. It was only after the head master told his father of the news but ironically he didn’t show any signs of encouragement but again from then onward he was never discouraged by his father in anyway.
Hence began a journey where he wanted to present his identity and his culture in his art. As a poem lover, he started to understand the importance of music, art and poem and started blending it in his own unique and tranquil style that he considers that each of his paintings have a story.

What does your painting tend to focus on?
For me my painting focuses on the environment, war, instability and crimes, all over the world. They have become my prime focus; hence I always try to promote such awareness in my art. The tree of life is a symbolic way for me to raise awareness or more ever a consciousness to the people of the world. Eventually, we are all one branch of a tree of life.
I noticed mandalas and sacred geometry in your art; does it have any significance to Mithila culture or art?
Yes , it does have a connection. Mandala is known as Aripan in Mithila culture and is related to Hinduism and Buddhism and even ancient cultures too. I believe that every ritual action of the cultures reflects the close living with nature. Mandala is cosmos, and we are a tiny speck of it. Mandala represents infinity and infinity makes you wonder and mandala art is the answer.
All your painting seems to be so rich in color is there any special color pigments you use or oil colors?
Colors in Mithila Art has always been of great importance, people in the Ancient days used to use various herbs and, Plants and flowers to get their vibrant colors for their paintings. I chose this style as the painting becomes more earthy and organic in color. I must sometimes wait for the perfect seasons for the plants and flowers to bloom to get my desired color in my paintings.
As I started conversing for an hour in topics we like, his art and his philosophy eventually made a lot of sense. A tree of life, or the symbol of life has three stages in Mithila culture and art, they are the roots that is in touch with ground , the leaves that reach out to the sky and the branches that waves around. We beings are like the branches of a tree. If one dies, the other is bound to sprout out if not disturbed. Or in other words to simplify to understand is that trees are a nesting place for birds, but what we find cruelty when a snake eats the chicks is actually balanced when a bird brings a snake for its chicks to feed. As complicated as it sounds it’s better to understand that a life in a tree shows the tree of life. This is what the artist S.C.Suman’s exhibition; Mithila Cosmos was all about, circumambulating the tree of life.