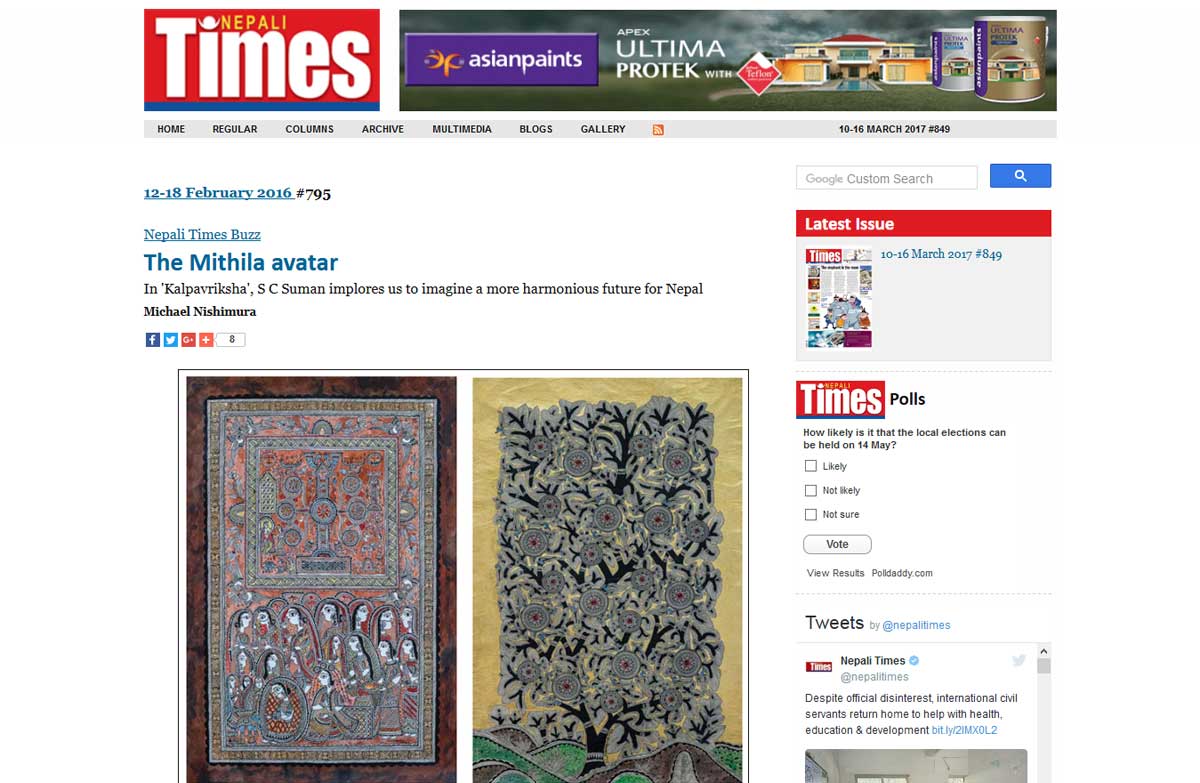 The mysteries of the universe may never be understood scientifically, but that doesn’t stop artist S C Suman from exploring the brilliance of our boundless cosmos through his Mithila-styled works. The fourth installment of his art series ‘Kalpavriksha’ is an ode to discovery through community-inspired storytelling.

As a follow-up to his previous exhibits at Siddhartha Art Gallery, ‘Kalpavriksha’ pays homage to the iconic wish-fulfilling tree revered in Hindu, Buddhist and Jain mythology. When asked why Suman has been invited time and again, Siddhartha’s curator Sangeeta Thapa said: “It’s his eye for detail, the subtlety of his colours and the beauty of his composition. He’s outdone himself this time.”

Suman works in the tradition of Mithila or Madhubani painting, born out of the rich history of the Maithili speaking regions of Nepal and India. The art form’s signature style is exemplified by the spellbinding intricacies of geometric patterns, leaving little space untouched. The paintings are organic, using twigs, brushes and fingers with natural dyes. Originally, Mithila painting was solely done by women who would bestow their skills to their daughters. Nowadays it is a popularised form, celebrated for its synthesis of religious motif, folk tradition and human story.

In each of the 32 works on display Suman’s scrupulous attention to detail is evident. The first floor of the exhibit provides an introduction to the breadth of the artist’s deft hand at various mediums including acrylic, natural pigment and mixed media. With mandalas nestled among the leaves of tree branches, tessellated fish swimming in celestial ponds and the use of short brush strokes to create variegated constellations, there is no limit to Suman’s imaginative spirit. Unquestionably, the famed wish-granting tree is the star of the gallery. Works like ‘Kalpavriksha IV’ display the complementary triad of roots, trunk and branches that mirror the three realms of the underworld, human consciousness and the heavens. The people communing on the ground are in harmony both with the fish beneath them and the peacocks perched above – evoking a sense of ecological symbiosis. Through his depiction of indigenous communities in Southern Nepal, Suman pays reverence to a way of life that doesn’t simply value an elementary respect for nature, but seeks pure cohabitation with it.

The second floor offers more explicitly religious themes, with works of Shakti slaying a demon, and Krishna riding a serpent naag and playing his seductive flute. Still, these are melded with depictions of mortal life, as pieces like ‘Village Story’ highlight the human experience of giving and receiving nature’s bounty. In his other work, Suman bemoans the exploitation of nature in order to accommodate the trappings of the modern world, and instead encourages us to opt for a relationship of unconditional love. The final floor parallels the others in its brilliance of colour, striking contrasts and stunning symmetries, but the exhibit reaches its apogee with the poignant series entitled ‘Rebuilding Nepal’. The first account shows buildings and pagodas crumbling to the ground during the earthquake. In the subsequent work, people of all creeds are helping however they can, as arms are stretched out of windows, looking for a hand to grab onto, and doves circle the scene from above. The last of the series depicts survivors amidst the rubble and people coming together with wheelbarrows and hammers to help in the reconstruction of the building, brick by brick.

The recent turmoil in Nepal is a focal point for Suman. “From 2013 until now, we’ve faced many problems. The constitution has come, but solutions have not,” he explains. “Rebuilding Nepal does not seem very possible these days. But all over the nation we’re trying to go forward the best we can.” ‘Kalpavriksha’ urges viewers to get lost in the beauty of its meticulous simplicity, that when appreciated in its full form, reveals itself to be exceedingly complex. Suman’s work demands the questioning of our existential journey, using the wish-granting tree as a metaphor for life, in exploring our roots and extending upwards to the branches of our possibility.

Suman says: “The wish-granting tree represents the wishes of all Nepali people. My wish is that my exhibition will help our country in a positive way.”   Mithila Cosmos IV – Kalpavriksha