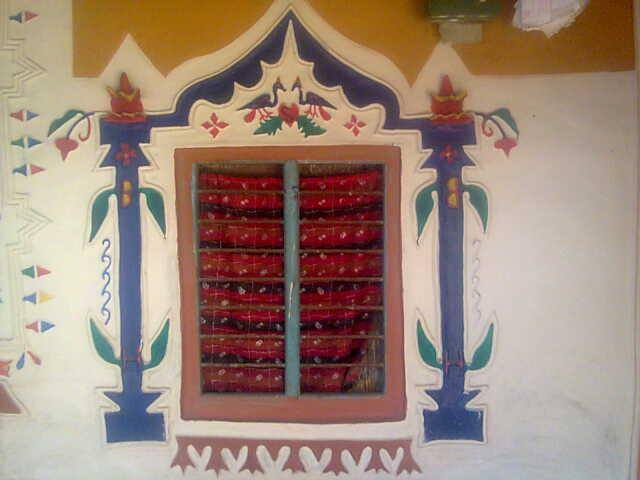 Nepal is known as the land of various ethnicities from the plains of Tarai to the height of Himalayan range. All ethnic groups have their own culture and tradition. The Tharu is one of the most popular indigenous people in Nepal and India. Tharus are one of the major indigenous communities of Nepal, who mostly inhabit Tarai region extending from Jhapa district in the East to Kanchanpur in the West, as well as inner-madhes namely Udaypur, Kamala khoch, Chitawan, Dang and Surkhet now collectively referred to as as Tharuhat. Tharus have rich cultural heritage. They speak their native language that has originated from Sanskrit and very close to Maithili; however as one travels from one end of the terai plains to the next there are considerable differences in the variety of Tharu language spoken locally. Similarly, it is observed that arts & crafts of Dangoriya Tharu ( in the western terai plain) is different from the arts and crafts of Morangiya Tharu ( in the eastern terai plain). Their distinct arts & crafts are integral parts of the daily life of the Tharu society. Infact, Tharu are most clearly distinguished by their art and culture. Some of their typical arts & crafts can be seen in the design of the tools they use such as agriculture tools and household items, as well as in their paintings and drawings. Both male and female are involved in preparing such arts & crafts. Tharu make and use arts & crafts in their daily life for various purposes. However, the same arts & crafts are named differently in different areas of settlement across the plain and in the inner-madhesh. There are some arts craftwork which are typical and not found among other Tharus except the Morangiya Tharu. The typical arts & crafts of Morgangia Tharus include Mokha arts, Achara, korha, Kaur, chulha so on. They have developed a typical style of painting the outer walls and verandas of their homes in colorful forms depicting Laxmi, the Hindu goddess of prosperity and fertility; such painting are done in preparation of Dipawali – the festival of light.

According to Kurt W. Mever and Pamela Deuel, as given in their book “The Tharu of the Tarai” ,The most striking aspect of the Tharu environment is the decorated walls,partitions and rice containers of the houses.
For generations Kochila Tharu women of the estern Tarai have transformed the verandahs and outer walls of their homes into colorful outdoor canvases dedicated to Laxshmi, the Hindu goddess of prosperity and fertility, at Tihar, the festival of lights.The third day of Tihar is devoted to worshipping Laxshmi. According to Tharu legend, on this night she circles the earth on the back of an owl, inspecting homes to see that they are properly purified with rigorous cleaning and have newly painted walls. At twilight, the villager’s burn small oil clay lamps to attract her attention to their houses, fields and farmyards so that the Goddess and grants the family prosperity throughout the coming year she visits each house.

According the same authors, while some of the patterns on these houses are simply decorative, others contain auspicious elements. Important in south Asian mythology, the peacock adorns more painted houses than do any other birds. Sanskrit literature associates it with human happiness, passion and bliss: Ram and Sita delighted in the company of peacocks, and when Sita was abandoned by Ram, it is said that the peacocks ceased to dance. Many Tharus believe that if they spot a peacock when they first step out of their home, they will be favored with good luck that day. 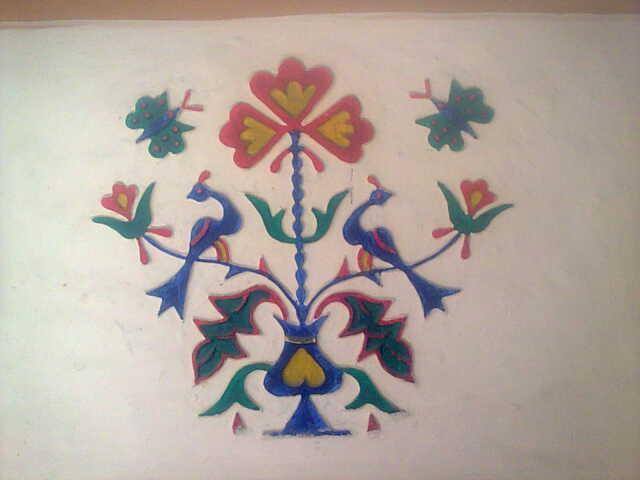 According to Pramila Gachhadar in her work “Tharu women and their Art and crafts” Tharus are fond of beauty which can be reflected in several ways, one of them being the designs and decoration on the walls of their houses. Tharu houses are decorated by their women folk who make beautiful paintings, mouldings in relief, engravings, etc on them. Especially before ceremonies, festivals or in special functions they try to make the house good looking by recolouring the paintings already made or by making new one if necessary. But it was found that the Morangiya tharu houses are decorated with beautiful mokhaa and mokha arts. The walls of houses are of mud when dry the wall is smeared with pond clay mixed in water (laththa maati). The wall is smeared with different types of mud locally called ‘laal maati’, ‘ujra maati’. This gives the walls a beautiful white or brick -red colour. Today, different kinds of chemical colours are easily
available in the market and can be used for this purpose. Various colors are used for paintings and designing like black, red, green, white, yellow etc. Some more colors are acquired by mixing more than two colors to increase the glaze and for attraction. There is no hard and fast rule for the application of colors. But mostly they try to match with colors of nature. For example, flowers painted red, yellow, pink etc and leafs painted green. But some painters use other color too in the leaf so it is depends on the personal interest and preference of the artist.

Some arts & crafts of Tharu used for decorative purpose are described as follows: Mokhaa art is popular endemic art of Tharu community. Tharu women perform their traditional, cultural and spiritual expression through mokhaa art over the walls especially at the two sides of door. After composing the hand art using clay soil, they again add various suitable colors. Even the component of local environment like plants and birds can be seen over these mokhaa arts. Well decorated house displaying mokhaa art is still known as a house having lucky women. There is prosperity in a house having mokhaa. According popular belief among the tharus, if there is no mokhaa in someone’s house, half kg rice is lost every day. From the two sides of mokhaa various designs of flowers (latpat) are made locally called mokha. Besides flowers, different birds (like peacock, parrot etc) & animals such as elephants horse etc are also made with mud, a special type of mud which has elasticity called latthaa maati. After shaping the mokha they are colored to give the finishing touch. Mokha is also made around the windows and over the wall. One week to one month time is taken for making these mokha depending upon the size and designs of mokha . The main materials required for making mokha and mokhaa are water, milk of cow or goat, jute fibres, clay. No special training is given to Tharu women and girls rather they get knowledge of it from their parents and society. Chakka it is made from clay;especially womed are involved in making this Chakka. Chakka is constructed in the in the inner and outer wall of house. Generally it is made in straight of door, for show as well to put things. Chakka can made in various artistc shape and sizes. Korha; painted with lal maati and ujra maati on the wall of Osra. Khutta;Pilar of wood corridor of home which is plastered with mud in various designs. various colour are applied for making various designs like plants, flowers, animals like elephants, peacock, tree, birds leaves etc. on the wall facing towards the street.”

Referring to the work of Suman, the author of this article, Abhi Subedi says ”he has used the relief of Tharu and Mithila art. …For example, the wall paintings of the Tharu people are treated with a naturalness that is simple and poetic.” In my exhibitions, I have incorporated the images from Dhushadh, Jhanger, Dhimal, Santhal, Satar and Tharu indigenous communities artwork of the “Bhitti-chitra” or “Mokha” (doorstep) paintings that adorn the façade of a Tharu home with decorative elements around the doorstep and windows also find expression in my series.