‘Artists soak in the essence of a place wherever they go’ 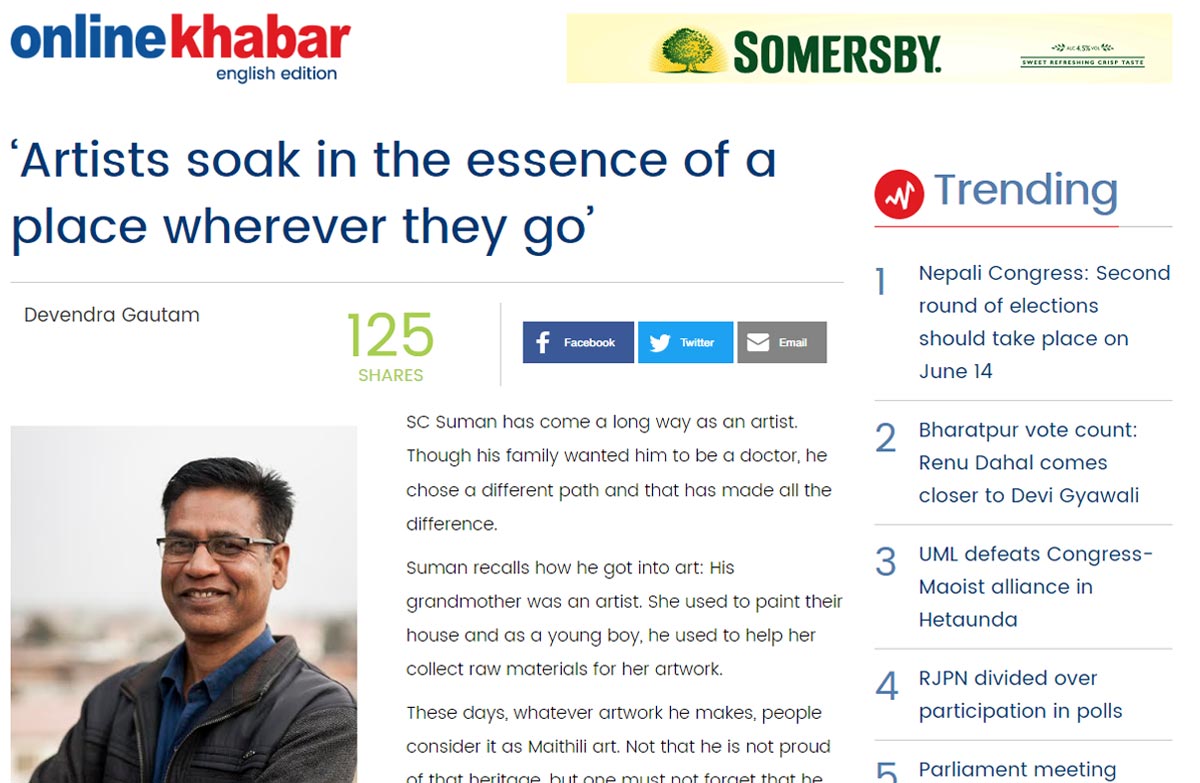 SC Suman has come a long way as an artist. Though his family wanted him to be a doctor, he chose a different path and that has made all the difference.

Suman recalls how he got into art: His grandmother was an artist. She used to paint their house and as a young boy, he used to help her collect raw materials for her artwork.

These days, whatever artwork he makes, people consider it as Maithili art. Not that he is not proud of that heritage, but one must not forget that he has added contemporary touches to his artworks in keeping with changing times.

Suman received training on textile handicraft in Mumbai and came back to Nepal. He recalls how he would work hours at a textile factory in Biratnagar and then find time to focus on his artwork. Subodh Chandra Das would sweat it out in the factory and SC Suman (his pseudonym) would dabble with paint and brush. And in between, there were responsibilities to shoulder: As a husband, a son, a brother and a father. He thanks his wife for supporting him through thick and thin.

That surely makes the artistic journey a tough one.

For Suman, the defining moment in his artistic journey came when he had a solo Maithili Art Exhibition in Biratnagar in 1991. Suman says it was the first such solo exhibition of Maithili art in Nepal.

There has been no looking back for Suman since then. His artwork featured in the Kathmandu Triennale 2017, a kumbh mela for artists from different parts of the world. In course of this conversation last week, Suman shared another good news: His artwork made it to the Beijing Biennale, which is currently underway. Another proud moment, not only for Suman, but also for Nepal.

Apart from working as an artist, Suman is also juggling as a council member and Head of Department of the Folk Arts at the Nepal Academy of Fine Arts. Suman laments that NAFA is yet to get a proper building (The building located at Naxal went down in the 2015 quake and construction of another NAFA building is yet to begin). He is also critical of politics going on at NAFA and agrees that it has taken a toll on artistic creativity. Criticism aside, they are presently drafting policies on arts in a state where politics reigns supreme.

Back in Biratnagar, where his family shifted from Siraha years back, he has a proper studio. But here in Kathmandu, his rented room is his studio. This is not to say he is complaining, but he misses his studio very much. Once his stint at NAFA ends, he will go back to his much-beloved studio (of the four-year NAFA term, he has already spent two years).

And he replies: Artists soak in the essence of a place wherever they go. I can, of course, bring the Tarai to life with my paintings here too.

Art has something to do with the fertility of the soil too. The Mithila region is very fertile. It has a large number of ponds where you get plenty of fish. It is the land where rice grows in abundance. A fertile land can feed a large number of people. Art, culture, civilisation flourish in such land.

Fish, lotus and Kalpabrikshya, the wish-fulfilling tree, are among recurring motifs featuring in Suman’s paintings. Suman says fish stands for fertility whereas the lotus represents the goddess.

In the Maithili artscape, different castes have different roles. The Kayasthas, who used to work traditionally as accountants, usually stick to the kachni style (linework). The Brahmins do something called bharni (filling with colours as they have an abundance of colours used for puja), whereas the so-called lower castes are into godana (making tattoos). But Suman loves to experiment with all these styles.

In love with the City

Kathmandu fascinates Suman, there’s no doubt about that. Come Saturday (weekly holiday), you see all sorts of washed clothes, including undergarments, hung on rooftops for drying, he says. “To me, they seem like flags,” Suman points, amused.

This display of clothes fluttering on rooftops is unique to him. In the Tarai, you don’t see such a display, he says. He sees beauty in this display (blame it on his artistic eyes)!

Congestion on Kathmandu roads also surprises him. Here, everyone is trying to move past everyone without thinking of others, he observes. (Here’s hoping that the complete ban on honking will make the arteries more road user-friendly).

Suman says Kathmandu loves him. Artists and journalists here love me, he says.

While there’s no dearth of people, who criticise the Capital for its extractive nature, for ‘monopolising’ a large share of resources, Suman says that is but natural. Foreign capitals also show that nature, he says. It is our national capital, so it is natural for it to have plenty of resources.

Suman concedes that artists based in mofussil do not get as much attention as those based in Kathmandu. But he is hopeful that this will change in the days to come. Suman hopes federalism will lead to the creation of sub-centres where folk arts will thrive. He hopes these hubs will promote and preserve artworks of indigenous communities like Tharu, Maithali, Gurung and Magar.