Handshake Across The Himalayas 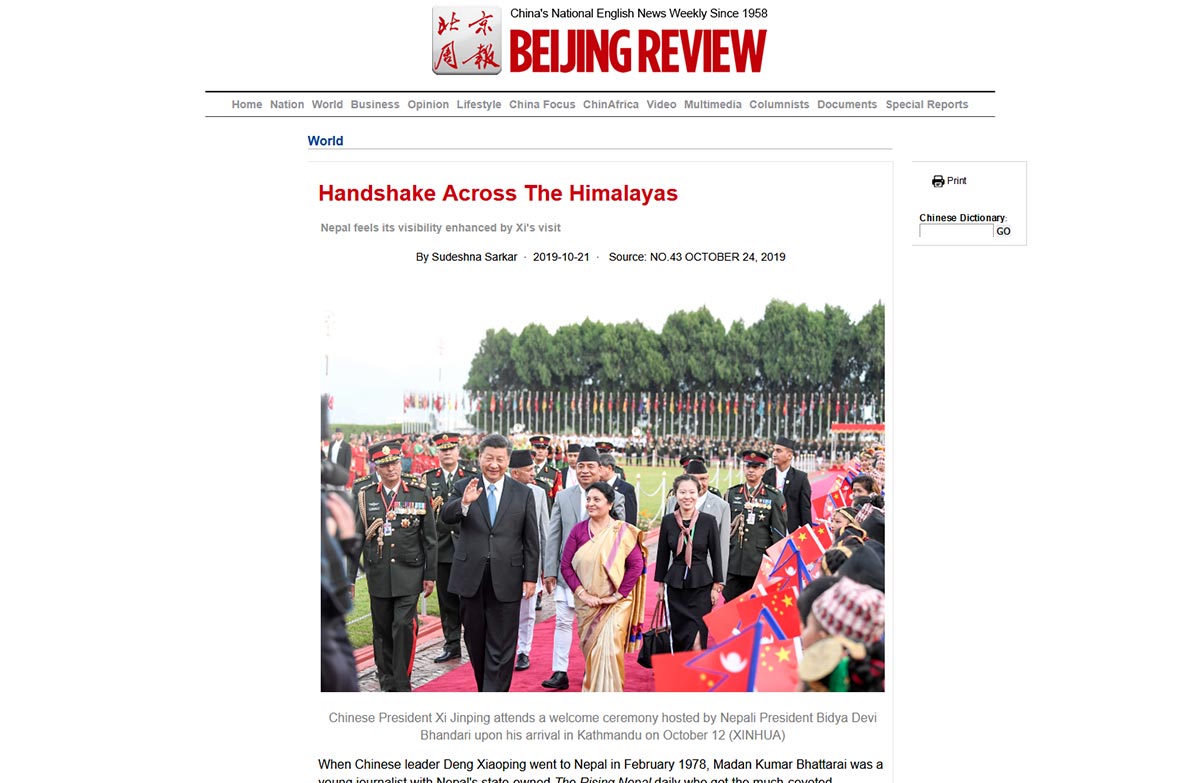 When Chinese leader Deng Xiaoping went to Nepal in February 1978, Madan Kumar Bhattarai was a young journalist with Nepal’s state-owned The Rising Nepal daily who got the much-coveted assignment to cover the visit. Forty-one years later, when Air China’s Boeing 747 carrying Chinese President Xi Jinping landed at the Tribhuvan International Airport in Kathmandu on October 12, the entire world had undergone a sea change.

From the China launched on a path of reform and opening up by Deng in 1978, the nation had become the second largest economy in the world. Nepal, from the world’s only Hindu kingdom during Deng’s visit, had become a secular republic. And Bhattarai, after becoming foreign secretary of Nepal and advisor to Nepali President Bidya Devi Bhandari, was enjoying a retirement break with his grandchildren in Melbourne, Australia.

But the impact of Xi’s state visit, reported across the globe, made Bhattarai put on his foreign affairs expert cap again to talk about Nepal’s past and future ties with China. He remembered Jiang Zemin, the last Chinese president to visit Nepal before Xi in 1996, had celebrated his 93rd birthday in August, gave Nepalis a succinct introduction to Xi’s life and work, and called the visit “an important milestone in the annals of Nepal-China ties of friendship and cooperation.”

In a signed article published by the Nepali media ahead of his two-day visit, Xi said the trip was meant to renew friendship and explore cooperation. “I hope we can together draw up a new blueprint for our bilateral ties,” he said.

In the article titled Toward Greater Progress of China-Nepal Friendship Across the Himalayas, he emphasized the need for greater efforts to develop a multi-dimensional connectivity network across the Himalayas, with four priority cooperation areas: trade and investment, post-disaster reconstruction, energy and tourism.

Despite the long gap, he said Nepal was no strange place to him. “I have long wanted to come to Nepal and see for myself its majestic mountains and rivers and unique culture,” he said, describing China and Nepal as “good brothers who always stand alongside each other.”

Xi remembered how when an earthquake devastated Wenchuan, a county in southwest China’s Sichuan Province, in 2008, “the government and people of Nepal made generous donations in support of the rescue and relief efforts in China.” In the same way, when a massive earthquake hit Nepal in 2015, the Chinese Government and people participated in rescue operations and post-disaster reconstruction. “These are shining examples of how China and Nepal look out for each other like brothers do,” he said.

The joint statement issued by the two countries detailed the plan for bilateral cooperation. Trade, tourism and infrastructure development and people-to-people exchanges were some of the major features.

The Salt Trade Route was one of the oldest trade links between China and Nepal. Around the ninth century, yak and sheep caravans went up the steep mountainous trail from northernmost Nepal to Tibet in southwest China, selling barley and wool to bring back salt.

Today, the trade is more sophisticated. Binod Chaudhary, the first Nepali businessman to make it to Forbes’ list of global billionaires, is a scion of the Chaudhary Group, a family-run business that is today a conglomerate with about 80 companies dealing in goods as diverse as instant noodles and real estate.

Chaudhary went on a trek in Yunnan Province in southwest China and was amazed by the tourism potential there. “A small city like Lijiang has almost 7 million tourists a year,” he said, talking about the city that was one of the stops on the ancient Tea Horse Trail. Today, Chaudhary’s company has two boutique hotels in the region. In addition, this year, the Chaudhary Group partnered with Huawei Technologies, a leading Chinese telecommunication equipment manufacturer, to bring 4G services to Nepal.

In 2017, Nepal joined the Belt and Road Initiative. It also became a founding member of the Asian Infrastructure Investment Bank. The memorandum of understanding on China-Nepal cooperation under the Belt and Road Initiative covers building dry ports, roads, railways, aviation and communications so that Nepal’s development agenda Samriddha Nepal, Sukhi Nepali (Prosperous Nepal, Happy Nepali) can transform the nation from a least developed country into a middle-income country by 2030.

Some of the major projects that received a push with Xi’s visit are a cross-border railway that will link Kathmandu with Xigaze in Tibet Autonomous Region, a second international airport in Pokhara, Nepal’s second most popular tourist destination after Kathmadu, and three economic corridors. Chinese banks will open branches and other financial services in Nepal in the future to facilitate trade and investment.

Moreover, an ambitious China-Nepal Electric Power Cooperation Plan will be completed within a year to explore the development of clean energy such as hydropower, wind power, solar power and biomass energy.

“A trans-Himalayan connectivity network is thus taking shape, which will serve not just our two countries but also the region as a whole,” Xi said.

Visits to China are a permanent fixture in Sarad Pradhan’s calendar. The media expert at Nepal Tourism Board (NTB) is a mandatory attendee at key fairs like the Beijing International Fair for Trade in Services and even lesser known events like the international photography competition in Chengdu, Sichuan, in 2017, to woo Chinese tourists to Nepal.

Pradhan was jubilant about Xi’s visit. In 2018, the number of tourists to Nepal surpassed 1 million, with Chinese visitors being the second largest group. Since Nepal is promoting 2020 as Visit Nepal Year (VNY), Pradhan thinks Xi’s visit will up the number of Chinese arrivals. Nepal was the first South Asian destination approved by the Chinese Government and in 2016, the Nepali Government waived the visa fee for Chinese tourists. Nearly 60 flights connect the two countries every week.

“China supports Nepal in hosting VNY 2020 and will encourage more Chinese tourists to visit Nepal,” Xi said. Reacting to that, Pradhan said it was a very powerful statement to promote VNY 2020 in China. “This is the first statement by a world leader about VNY 2020,” he said.

Pradhan described Chinese tourists’ growing interest in soft adventures in Nepal such as jungle safaris and paragliding. Young couples are also discovering Nepal as a spectacular destination for shooting their obligatory wedding photographs. Pradhan said NTB conducts regular Chinese classes for tourism entrepreneurs with the support of the Chinese Government to bridge the language gap.

Besides Kathmandu, Pokhara, and Chitwan in south Nepal, famed for its wildlife park, Lumbini, also in the south, is a major draw, being the birthplace of Nepali Prince Siddhartha, who later became the Buddha, the founder of Buddhism.

Xi highlighted the Zhong Hua Chinese Buddhist Monastery in Lumbini, calling it “another symbol of our religious and cultural interactions,” and mentioned Chinese monk Xuanzang’s visit to Lumbini.

It is a long way from Mithila to Beijing, Mithila being an ancient cultural region in South Asia whose identity still survives through a colorful and intricate form of folk art, mostly done by women.

S.C. Suman learned the art from watching his grandmother paint. Today, he is a renowned Mithila folk artist who has attended prestigious art events in China with his paintings. The last was the Eighth Beijing International Art Biennale held in the National Art Museum in Beijing from August 30 to September 20. Themed A Colorful World and a Shared Future, it featured works by nearly 600 artists from 113 countries.

Suman’s pre-industrial landscape in South Asia with stylized trees and people living in harmony with nature under a vivid blue sky was one of the exhibits.

“I have also taken part in the seventh edition of the biennale and the Third Maritime Silk Road International Arts Festival in Quanzhou, Fujian Province (in southeast China),” he said. “China has the capability to hold such international art events attended by artists from all over the world. We can’t hold such huge events on our own in Nepal but we can access the international art market through China. In this way we can reach the world.”

Suman said the ties forged through art and culture are stronger than diplomatic links. “One of the first Nepalis to create a link with China was Arniko, an artist,” he said.

Xi also mentioned Arniko, saying, “Then in the Yuan Dynasty (1271-1368), Arniko, the renowned Nepali architect, led a group of artisans to China and presided over the construction of the White Stupa at the Miaoying Temple in Beijing… These are but a few examples of our past interactions that have inspired a lasting friendship between our peoples.”

“Nepal, sitting between its larger neighbors China and India, is often overlooked since it is also an underdeveloped economy,” Suman said. “But Xi’s visit put us on the world map again.”