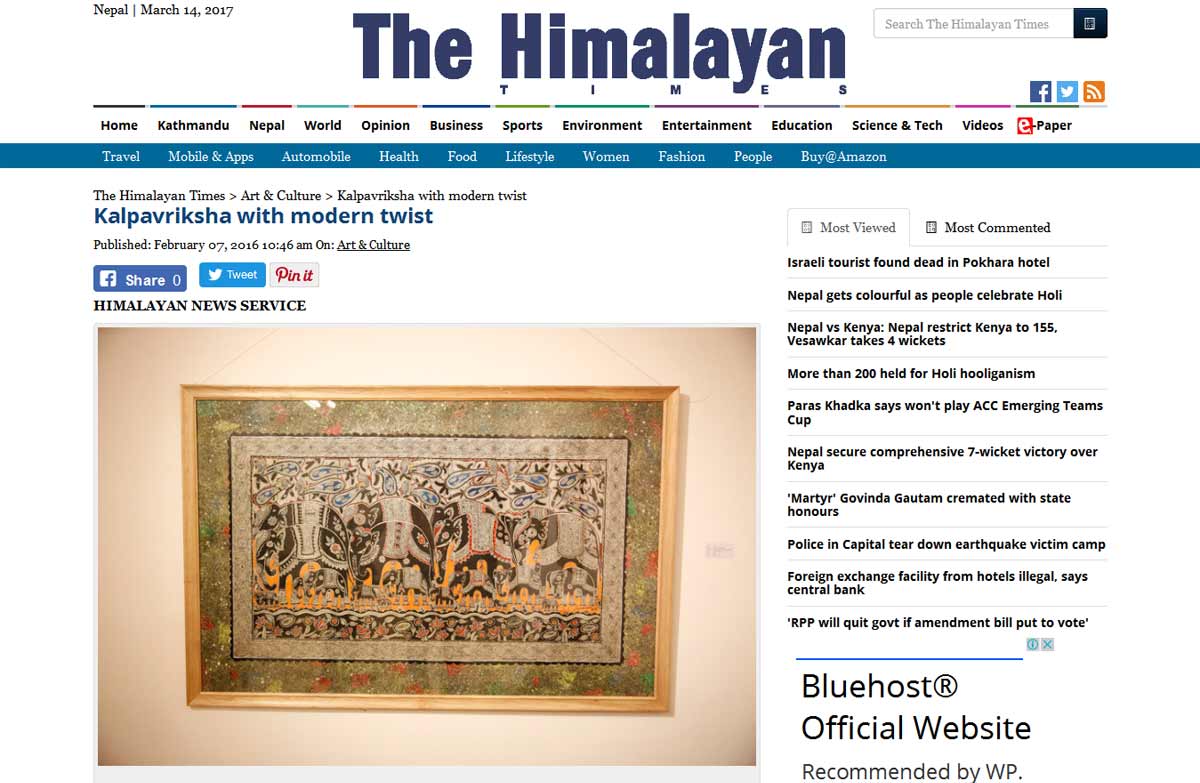 Kalpavriksha , a divine wish-granting tree as per Hindu mythology evolved from water during Samundra Manthan — the churning of the ocean by gods and demons. This wish fulfilling tree has inspired artist SC Suman for his 15th solo exhibition ‘Mithila Cosmos IV Kalpavriksha’. Suman’s works created between 2013 to 2015 are on display in the exhibition that started on February 3 at Siddhartha Art Gallery, Babermahal Revisited.

The artist believes Nepal as a country should be like Kalpavriksha — nurturing the needs of her people. And people have got their new Constitution through a process similar to Samundra Manthan, performed by politicians, as per the artist.

“In Samundra Manthan various treasures as well as poisonous things came out and one of the venoms was handled by Lord Shiva. I believe our politicians too have to manage the negative aspects that have emerged with the new Constitution,” he explained.

And to put forth his ideas, Suman has used symbols of fish, lotus, peacock, elephant, trees among others in his Mithila paintings.

Suman has painted various activities of Lord Krishna — Krishna saving an entire village from natural disaster by carrying the Gobhardhan mountain on his little finger, Krishna dancing on the head of Kaaliya Naag, et cetera.

He has also depicted Chhath Puja and other festivals celebrated in Tarai. Rituals like Ambo Bibha — where a girl is married to a mango tree before her menstruation begins — make a part of Suman’s works.

In his painting ‘Ambo Bibha’, Suman has created a mango tree, bearing yellow ripe mangos. The mango tree is spread over the upper half of the canvas. Females carrying fruits to worship the tree, men playing musical instruments like dholak and flute in a pleasant gathering, fill the remaining space. The artist has used natural pigments on art paper to create hues of orange, yellow, green, black, and red.

Mithila art is used to explain not only mythological events, but also to reflect the incidents of contemporary situation. And folk artist Suman has touched the topic of earthquake too. One of his works ‘Rebuild Nepal’ has a set of three paintings. People are helping to rebuild damaged houses in this work. What is interesting in this work is — the houses are being constructed in Newari style, but people constructing it are from Tarai.

The exhibition is on till March 2.