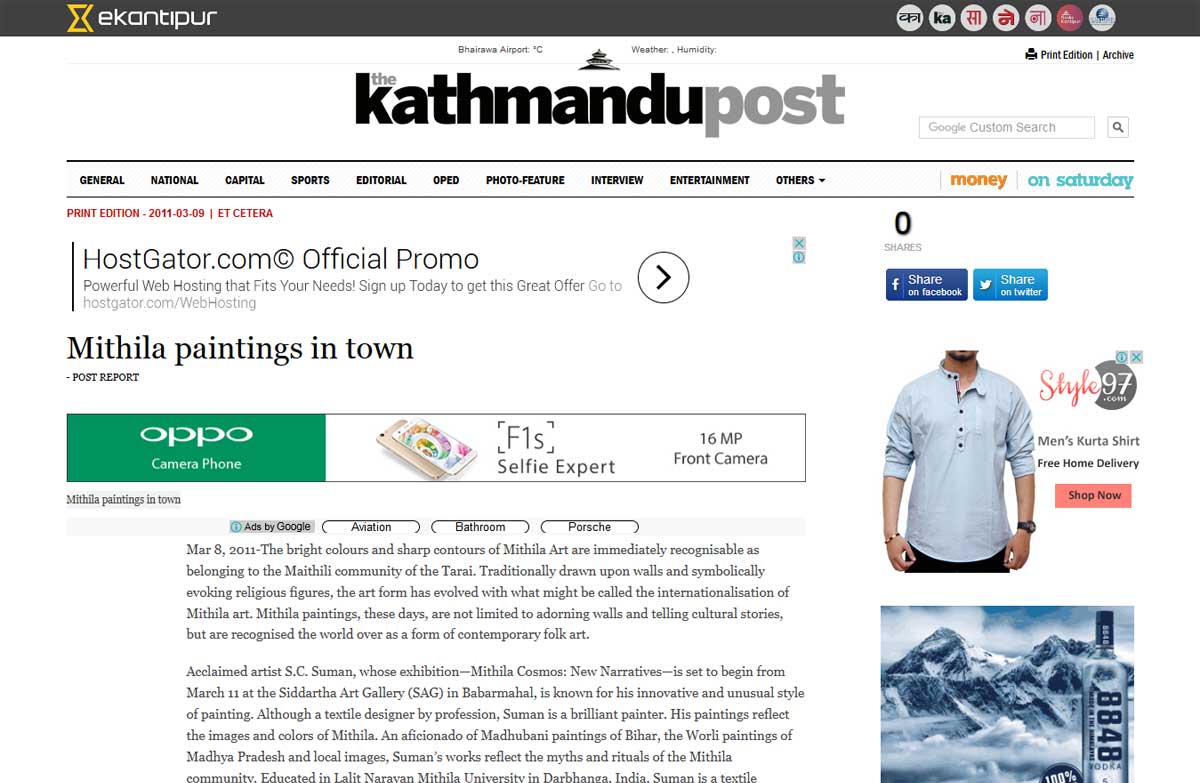 Mar 8, 2011-The bright colours and sharp contours of Mithila Art are immediately recognisable as belonging to the Maithili community of the Tarai. Traditionally drawn upon walls and symbolically evoking religious figures, the art form has evolved with what might be called the internationalisation of Mithila art. Mithila paintings, these days, are not limited to adorning walls and telling cultural stories, but are recognised the world over as a form of contemporary folk art.

Acclaimed artist S.C. Suman, whose exhibition—Mithila Cosmos: New Narratives—is set to begin from March 11 at the Siddartha Art Gallery (SAG) in Babarmahal, is known for his innovative and unusual style of painting. Although a textile designer by profession, Suman is a brilliant painter. His paintings reflect the images and colors of Mithila. An aficionado of Madhubani paintings of Bihar, the Worli paintings of Madhya Pradesh and local images, Suman’s works reflect the myths and rituals of the Mithila community. Educated in Lalit Narayan Mithila University in Darbhanga, India, Suman is a textile designer and works in Triveni Textiles of Birgunj.

The artistic flair observable in the paintings on display at the SAG during his previous exhibition, The Mithila Cosmos, earned rave reviews from critics and reviewers. His art works usually consist if subtle, delicate shades of brown and grey. Yet, the calmness and subtlety of these muted colours are often broken by burst of bright, bold colours.

As the title of his new exhibition suggests, these paintings are surely going to tell stories. Suman’s paintings might look simple, but they carry deep meanings behind them. His previous exhibition showed experimentiatons with the use of the indigenous plants and life forms of his native Tarai.

The exhibition will begin from March 11 and continue till April 5.