The cosmos as a kaleidoscope 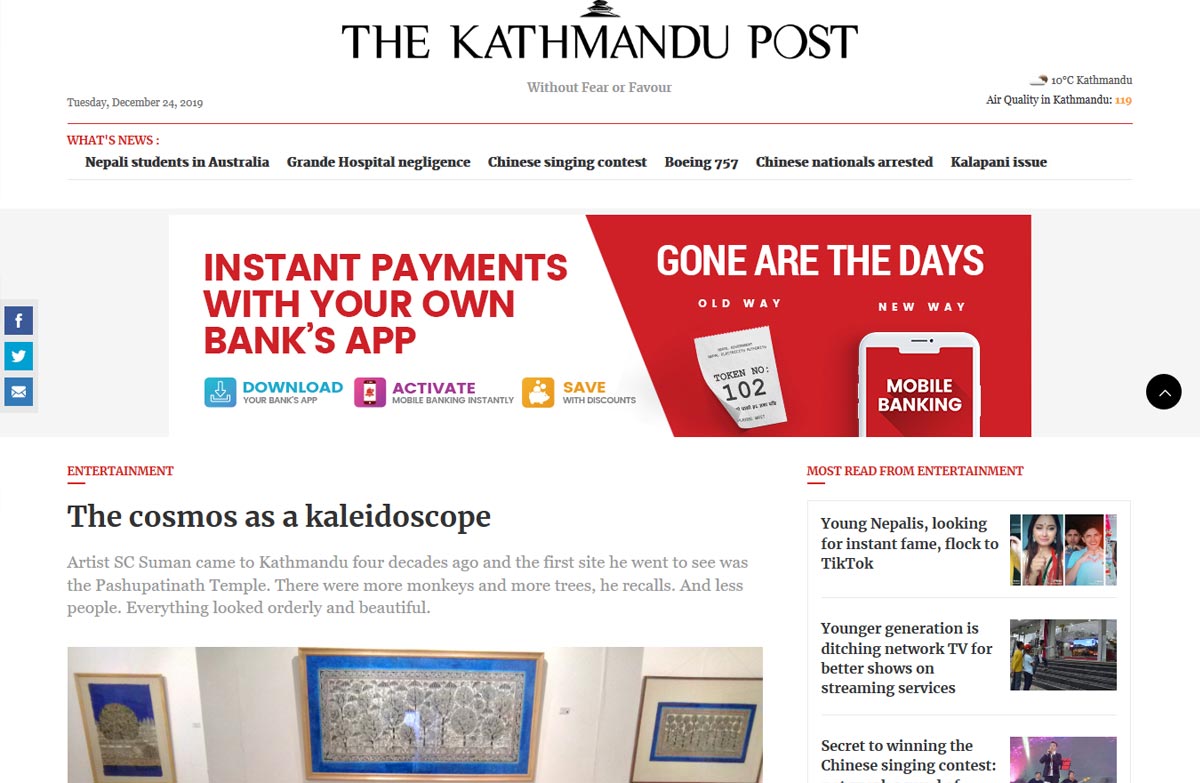 Artist SC Suman came to Kathmandu four decades ago and the first site he went to see was the Pashupatinath Temple. There were more monkeys and more trees, he recalls. And less people. Everything looked orderly and beautiful.

In Suman’s new exhibition Mithila Cosmos: Songs of Innocence & Experience, this image of Pashupatinath is complemented by another painting of the temple as it stands now. This diptych, along with another displaying Kirtipur then and now, is the highlight of the show. ‘Pashupati Then’ naturally looks more peaceful, with colourful trees and fewer human figures. There are three monkey-like figures in this piece, the artist’s reference to the pictorial maxim The Three Monkeys, embodying the proverbial principle ‘see no evil, hear no evil, speak no evil.’

The three monkeys, however, are missing in the ‘Pashupati Now’ piece. The painting looks more congested, with more human figures and more activity. Definitely, the painting means a lot more than just its literal visage, but what the artist is trying to say is clear even for someone not well-versed in the Mithila arts—the once sacred religious site of piousness and goodwill has now become a souk for pageantry and business.

The artist makes similar observations in ‘Kirtipur Then and Now’. What looks so orderly and populated with monasteries and vegetation in ‘Kirtipur Then’ degenerates into chaos in ‘Kirtipur Now’, with more people, temples toppled upside down, and more markets.

Suman has travelled a long way down memory lane to create the Mithila-inspired artworks to put on display for his ‘Mithila Cosmos’ exhibition, currently ongoing at the Siddhartha Art Gallery in Babarmahal. The exhibit displays a total of 29 artworks and is, as Suman says, his seminal exhibition. This is Suman’s 16th solo exhibit and the works seem to encompass Suman’s life from the beginning to the end.

The works on display chart the artist’s two-pronged journey, the journey within and without—from coming to Kathmandu, travelling and trying to find his place to the journey inside himself. The works embody the artist’s concern for the world he lives in, not only for the people in it but more so for the animals, in works such as ‘Elephant Herd in Nijgadh Jungle’ and ‘Mass Protest by Wild Life’. The former piece is more formal, featuring shapes of elephants and trees with perfect circles enclosing their branches. The black-and-white inside is bordered by two layers, the first made up of red and saffron and another in pitch blue. While the ‘Elephant Herd’ exudes a vibe of pleasing assonance, the same jungle in ‘Mass Protest by Wild Life’ looks disturbed and in disarray. Anxious-looking wildlife populate this painting. There are plenty of tilted umbrellas.

The trees too are haphazard, their trunks bent.

Made late last year, the painting is Suman’s response to the government decision to cut down more than two million trees to construct an airport in Nijgadh. “The decision was out and out farcical,” Suman says. “How could anyone imagine destroying the habitat of so many wildlife in the name development?”

These themes of civilisation, development and decadence are further evoked by pieces such as ‘Vishnumati Ghat’ and ‘Guhyeshwari’.

What makes for the most pleasant observation in this exhibit, however, is when the artist paints the journey inside of himself. “The journey inside is the most vibrant, isn’t it?” Suman says, before we proceed to observe the last piece on display, ‘Journey of Soul’.

This acrylic on art paper piece makes use of a variety of colours, unlike the others. There is a big circle in the centre and inside it is a smaller circle and a lotus flower. Hues of saffron, yellows and blues are most pronounced. Wave-like lines cross the big circle and in the small circle, there are silver-coloured dots.

“The soul is eternal, it goes on,” says Suman. “Even though life is disturbed by ups and downs there has to be silver linings, twinkling stars, which make one go on and find one’s purpose in this universe.”

The exhibition ‘Mithila Cosmos: Songs of Innocence & Experience’ is on display at the Siddhartha Art Gallery, Babermahal, everyday from 11am to 5pm, until February 20.